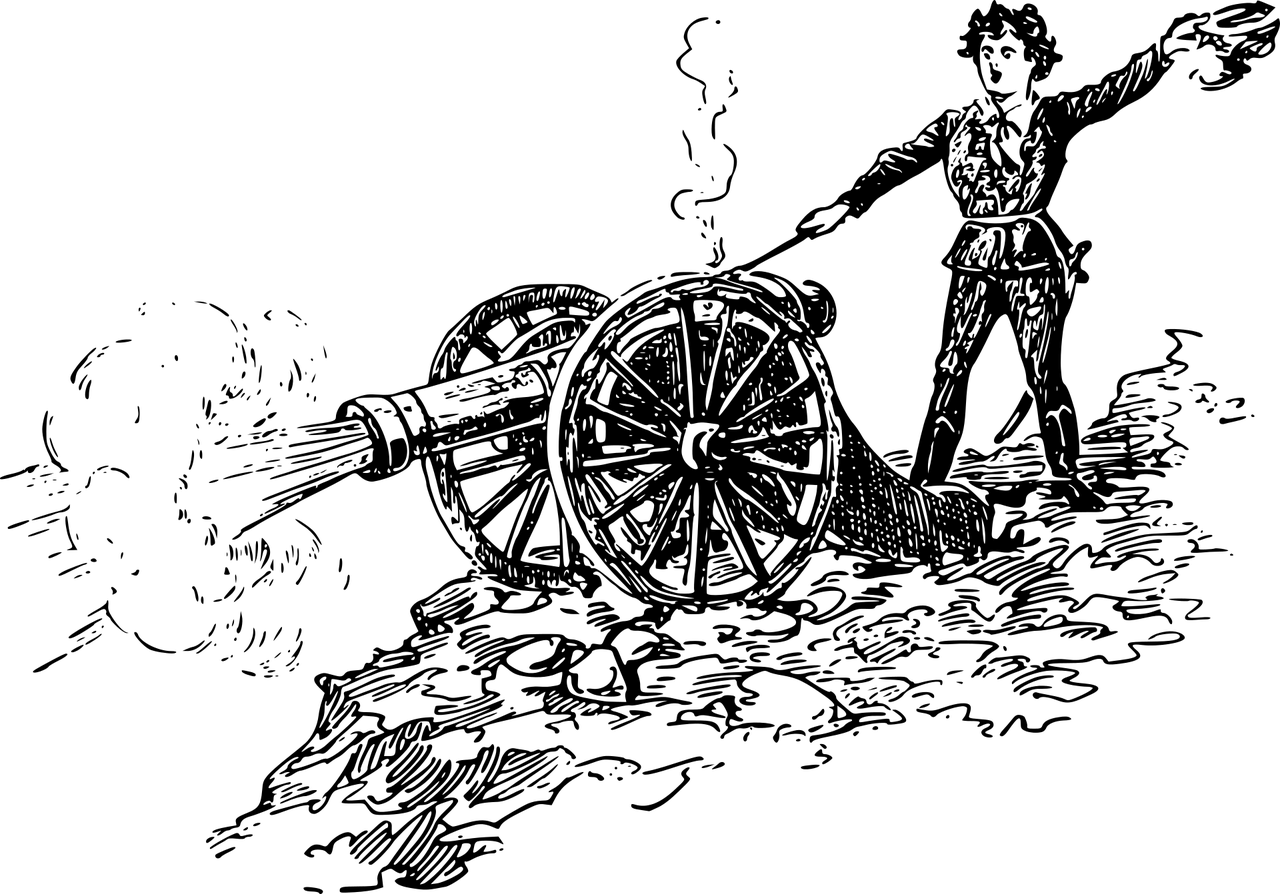 08 May Midday Cannon in Nice

An insanely loud bang resonates through the city of Nice every day. No, it is not a pigeon scaring scheme, or an elaborate hoax. Fear not, it simply means it’s midday!. If you happen to sip on your sneaky glass of pre-lunch apero (and not to spill it), watch carefully. It scares the crap out of tourists while local people’s foreheads twitch optimistically in a strangely comforting way. Native or ‘adopted’ Niçois can’t help but to check their watches…If there is no cannon at midday, there is definitely something wrong.

There is a warm story behind all of this. We have heard a few versions of it (all agree to the main facts) but the one told by a local tour guide when we first moved here, is the one we’ve decided to share with you.

‘Cherchez la femme’…the key to a problem or a mystery, behind every great story there is a woman.

Between 1861 and 1866, an ex British army officer Sir Thomas Coventry- More and his beloved wife used to escape the dull Scottish winters to the mild climate of the French Riviera. Theirs was a very happy marriage indeed but there was a slight difference in personalities. While Sir Thomas loved his daily routine and prided himself on certain values such as promptness and discipline, his wife became more and more frenzied (by Victorian measures).

Some days she’d leave their home after breakfast, rushing to meet her lady friends, joining their jovial rattling on and gossiping. Other times she would be seen idling her way via the promenade for long hours by herself. Surely, wasn’t it just splendid, all the different shades of the blue sky and the sea? By all accounts, she was no queen of punctuality and would often make it home well past lunchtime, leaving her husband waiting and waiting. Shocking, wasn’t it?

Sir Thomas grew tired of his wife’s escapades. He was expecting the same familiarity in their everyday life, even when in France! And he did not like to be hungry. So he came up with an ingenious plan and decided to propose it to the Nice city council and mayor François Malausséna.

Thankfully, Sir Thomas spoke good broken French despite his strong accent. A certain level of communication was required for a quest as peculiar as this one. The members of the city council grew excited, the foreigners rarely knocked on their door but it usually meant one thing… money.

Then Sir Thomas proposed his plan – to blow a cannon from atop of the Chateau every day at noon so his wife knew it was time to come home and prepare his lunch! All at his expense of course using his own cannon (back then a normal part of one’s luggage).

There was a minute of silence, not even a whisper and Thomas started to worry that it was a lost cause…The members of the council started to shriek between themselves in panic. What does this ‘étranger‘ think about himself? What does he know, he probably drinks red wine with his mussels!

The mayor banged his fist on the table to silence them. And then he burst out laughing. “My crazy friend, nobody made me laugh so hard for a long time, so I allow you”.

And so the tradition started. Every day, sir Thomas released a coloured globe from his terrace as a sign to a municipal employee to light the lock of the barrel.

After several years, the couple stopped coming to the French Riviera and the funds paid in advance dried up, so the city decided to stop this nonsense. But the locals started to complain (what a strange thing for the French people to do) as the bell ringers around the town did not get their time always right. So on 19th November 1885, the city council of Nice decided to bring the noon cannon back.

Today, it is not a cannon but a large firework that is manually set off from the same place as the original cannon – the lower terrace of the Chateau.

Before retiring in 2018, the same gentleman has been doing this job for 27 years, Philippe Arnello, artificer, the guardian and guarantor of the tradition. A story has it that he missed it only twice, once due to a traffic jam and the second time due to a demonstration (both very believable reasons).

There are only two exceptions to the usual noon ‘boom’. 14th of July there is no cannon out of respect to the victims of the attack and as a heartwarming April’s fools day prank, it is set off an hour early and a once off, in 2020 during the COVID19 crisis and confinement the canon did not sound.