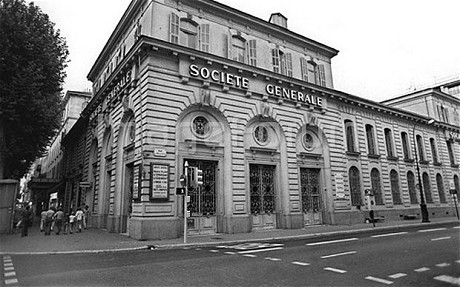 Posted at 13:58h in Scandals of the French Riviera by Alexandra Krajanova & Dermot Mulhall
2 Likes
Share

One of the greatest and most sensational bank robberies in the history of France remains a mystery to this day. On Monday 19th 1976, Société Générale Bank in Nice, located just a few steps from Massena Square had no cash to give to their customers and the door of their vault wouldn’t open. ‘Must be a technical problem’, the team of specialists from the vault’s manufactures were assuring the bank manager. It took several hours to break through the massive steel door and once they got a peek inside, everybody realized it was not going to be just another routine day in the office…

Albert Spaggiari, Bert, as he liked to be called, was a town photographer with a great reputation as well as a shady past and itchy fingers. 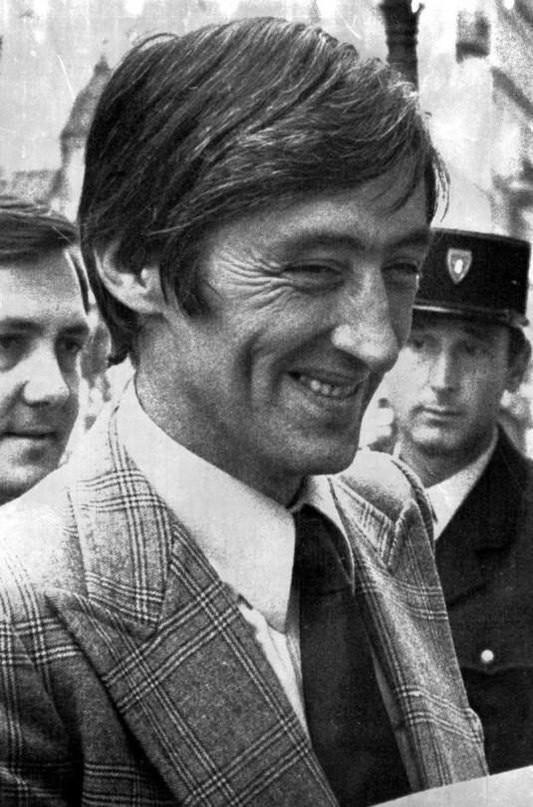 At the tender age of 17 he left France to join the Parachute Regiment and was sent to fight Ho Chi Minh’s communist army in Vietnam. He became a great soldier but as a young boy he learnt how to steal and once a thief, always a thief. One story tells off how he broke into a brothel in Hanoi and took all the money, another one claims it was a milk bar but the fact is that he was sent back home to France and jailed. Once out, he got involved with a right wing terrorist organization fighting against Algeria gaining independence from France. He was arrested for complicity in political terrorism, and went behind the bars again, for three years.

It looked like he got his life back together, when he moved to Nice in 1968 with his wife Marcelle, called Audi. They renovated an old farm in the Nicoise hills, he had his photo studio on 56 Route de Marseilles in Nice and his wife worked as a nurse. But this rather ordinary life was not satisfying him.

Whether we believe it or not, the whole idea of robbing a bank came from reading a novel written by Robert Pollock, Loophole, published in 1972. The book describes a story of burglars robbing a bank through the city’s sewerage system… And when Bert realized that the sewers of Nice run closely to the walls of Société Générale Bank, the master plan started to form in his head.

He left his studio in the hands of a manager claiming he needs time off to raise the chickens in the countryside of Nice. The police would later dig guns and explosives from under a chicken coop.

We should start with the fact that Bert used to work for a company that manufactured bank vaults (the same one that provided the vault for Société Générale bank) while living in Dakar!

First he went to the Town Hall and asked for the plans of the city sewers. Nobody got suspicious, they are public and builders ask for them often. Then he spent a week walking and crawling through the sewers, getting to know the surroundings.

He rented one of the safety boxes in bank’s vault and the only thing he put in it was a loud alarm clock that went off at midnight to test the acoustic and seismic detection alarms. Luckily for him, the bank, so confident in the thickness of its vault thought it was impenetrable and no alarms were needed. How wrong they were…

Through his well established connections, he recruited a group of gangsters from Marseilles.

For two months, the team of 20 men were getting their hands dirty and feet wet surrounded by human waste, digging the tunnel leading to the bowels of the bank. They were using simple equipment that could not be traced and rubber rafts to move through the sewer. A lot of bubble bath was used to scrub off the sewer slime and some of the heaviest equipment had to be lowered through a manhole just outside the bank.

The tunnel was a masterpiece of a construction. Barely big enough for a man to crawl through, it was 8 meters  (25 feet) long, 80 cm (2 feet) wide and 1.3 meters (20 inches) high, dug completely by hand as the noise of power tools would attract too much attention. For extra stability and security, the walls were reinforced with the concrete and electrical cables provided the light. ‘Naughty’ pictures were hung along the tunnel, most likely to keep the boys in good spirits and motivated.

Friday 16th of July 1976 was “The Night” on the three day bank holiday weekend of Bastille Day celebration. The gang got in and had the whole weekend to work unnoticed. The boys worked hard, yet, out of 4000 safe deposit boxes they managed to open “only” around 10% of them but had taken nothing, however valuable, that might be traced.

Because the bank had no right to know what was in the safe deposit boxes, and some of their panicky customers were unwilling to admit their content, the value of the haul would never be known. It was estimated around 50 millions francs (€29 millions) in cash, gold bars and jewels but some believed it could had been even double.

No fingerprints were found, just wine bottles, cigarette boxes, leftovers of food cooked on the site and the gang even used antique silver serving dishes as their toilets… 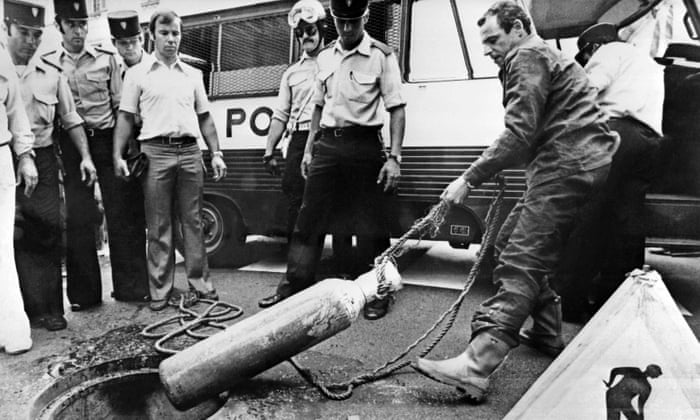 The burglars left a famous message on the wall, that made them almost local folk heros – Ni Coup De Feu, Ni Violence, Ni Haine – Without Hatred, Without Violence, Without Weapons.

The Investigation, Trial  and The Grand Escape

When the news of the robbery got out, the police were not only busy with the investigation, they also had to protect the staff members of the bank! When people realized their life savings or pretty expensive jewelry were stolen, they lost it. There were loud cries, dirty threats and spits directed at the branch employees on daily basis.

A few weeks later, the police had a lot of suspects. After careful elimination, they were left with two members of the Marseille underworld, who eventually cracked and happily sang the name of ‘the big fish’.

Albert Spaggiari was on his way back from Japan where he accompanied Mayor of Nice, Jaques Médecin, as a photographer. His influential friendships around Nice did not stop police officers from arresting him on October 28th 1976 outside of his photo shop. Bert was a tough cookie but once the commissar threatened to involve his wife, he started to cooperate, or at least he pretended to. Less than five months later into the investigation, on March 10th 1977, he asked to be seen by a judge in Palais de Justice, Nice, accompanied by his lawyer and future mayor of Nice Jacques Pyrat.

He claimed to be ready to reveal the names of the other robbers as well as a piece of evidence. At the meeting he provided a document (fake) which was coded with symbols and the judge demanded an explanation… at this time, Spaggiari took an advantage and jumped out of the window, 3 meters (9 feet) down on to the top of the roof of a Renault 6 parked on the street. It must have been an easy one for him, don’t forget he was a member of the parachute regiment! He shouted “Au revoir!” as he jumped on the back of the Kawasaki and escaped with an unknown driver. For a long time, the rumor had it that the mysterious driver was in fact Christian Estrosi, the present mayor of Nice (as of 2018), a former motorcycle champion. However, he was able to provide an alibi stating he took a part in a race in Florida.

Spaggiari was given a life sentence in absentia and spent the rest of his life on the run between South America and Europe. His name was on everybody’s lips but he disappeared without a trace. Time to time, his photograph turned up in the papers or he gave an interview. It is believed he visited his wife Audi and his mother in south of France regularly. In 1978, Bert wrote about the burglary in his book “Les egouts du paradis“, or “The Sewers of Paradise”.

He spent his last years in Italy, where he died of lung cancer in 1989 at the age of 57. His body was brought and left in his mother’s house in Hyères (it is believed Audi organized it).

In 2010 a book ‘La Vérité sur la Casse de Nice’ (The Truth About the Nice Case) has been published under the pseudonym ‘Amigo’. Amigo portrayed himself as the mastermind of the whole operation and claimed that Spaggiari played just a minor part in it. It did not take long for the police to conclude who Amigo really was.

Jacques Cassandri, Corsican born, Marseille’s key mafia figure. He had done time in the prison for playing a role in a French Connection heroin ring and today is sitting atop of a large business empire. Cassandri claims he got tired of Bert taking all the credit for the heist and even his children confessed that their father used to brag about the robbery all the time.

One can’t help himself wondering, was his ego bigger than a fear of going to prison? Was it so important after all these years to publish a book that could possibly bring him back behind bars? Who was advising him that he would get away unpunished? Well, he clearly must have thought that the crime was too old to be prosecuted for. But was he naive enough to believe that the French jurisdiction wouldn’t go after him for money laundering, a crime for which France has no statute of limitations? So it must have been ego… Truth is that very little of the stolen money was recovered.

The trial of Cassandri (for money laundering) started in February 2018 in Marseille and at the time of writing this article, the verdict hasn’t been reached yet.